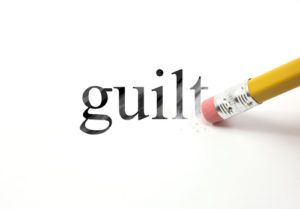 Definition: in no-fault divorce, the courts do not adjudicate legal guilt or innocence. But emotional guilt can play a powerful role in the outcome of a divorce settlement.

Guilt can be a judgment that a divorcee imposes on him or herself, or it can be a force of manipulation hoisted by one spouse upon the other. Either way, it should have no place in how one negotiates a settlement—it always works against the interest of the party who feels guilty.

Consider a species of divorcee I call “The Guilty One.”

The Guilty One comes into a divorce mediation ready to give away the farm. He or she might feel guilty about any number of perceived marital wrongdoings: failure to make enough money, sexual infidelity, overworking and under-involvement in child rearing, running up too much debt, or substance abuse. The Guilty One may look to assuage guilt and make amends by being overly “nice” at the outset of the negotiation and offering to pay more than typically required and often more than can be afforded. Or The Guilty One may come into negotiations, planning to secure a fair financial deal, but succumbs to pressure from “The Wronged One” (the other spouse), to compensate for perceived marital transgressions.

Guilt, however, is usually abated by time and reality. If a settlement agreement is reached very quickly, The Guilty One is going to come to regret the deal. As emotions naturally subside over time, the logical mind gains power and The Guilty One rescinds initial proposals. Then, as The Guilty One recoils, The Wronged One revolts. Negotiations hit a brick wall and the emotional balance teeter-totters.

Spouses of The Guilty One often make the mistake of failing to realize that the The Guilty One’s initial offer is usually the most generous outcome achievable. When one spouse feels deeply guilty the other spouse probably feels righteously indignant – and rejects the guilt offering as inadequate. It may not be money so much as a sense of justice that The Wronged One seeks. So a very well-gilded initial offer is viewed as tarnished brass.

Stalemate kicks in. The Guilty One begins to feel underappreciated, seeks legal advice, and gets a cold-slap across the financial face. The guilt offering is withdrawn. For The Wronged One, the opportunity for punishment and perceived justice is lost. Attempts to resurrect the The Guilty One’s original proposal fail. Resentments intensify.

The negotiation just became a lot more complicated and expensive.

What’s the Takeaway? There are a few depending on who you are:

If you have any questions, comments or suggestions regarding my upcoming blog articles, please feel free to contact me.